Ultimate Travel Guide to Medellín: What to do in Colombia´s Coolest City

Medellin. A city synonymous with Pablo Escobar, Narcos and a bloody civil war that saw it become the most dangerous city on earth during the 80s and early 90s. Not anymore. Thankfully the dark days of the Medellín and Cali cartels slaughtering one another´s innocent civilians are a thing of the past. We found a cosmopolitan, chic city that competes with Rio and Buenos Aires as one of South America´s most liveable and enticing cities. Medellín was our favourite place in Colombia, which is surprising given we had set out to avoid busy cities in favour of the country’s beaches, coffee regions and national parks. We had planned on spending just a couple of days in Medellin but a week later, we had to forcibly tear ourselves away. Here’s my travel guide to Medellin, Colombia’s coolest city…

The choice of hostels is pretty overwhelming and whilst most people flock to the nightlife of El Poblado, I would strongly recommend staying in nearby Manila neighbourhood — you’re close enough to the action to walk to the bars but you won’t be kept awake by the sound of pumping reggaeton. The neighbouring barrio of Manila is safer, quieter and has a great restaurant scene. By far the best hostel we stayed in the whole of Colombia, if not South America, was Los Patios Boutique — a true game changer of a hostel. You won´t find it Lonely Planet as it only opened last month but this place literally blew every other hostel we’ve stayed at off the charts.

The lobby looks like a boutique Manhattan hotel, every floor has a different theme inspired by Colombia’s diverse regions and you can cook on the rooftop bbq, help yourself to fresh thyme or mint from the herb garden and grab a craft beer from the tiki bar. Three engergetic young Colombian entrepreneurs dreamt up the ambitious concept and it’s taken 2 years and a lot of blood, sweat and tears to realise their dream. 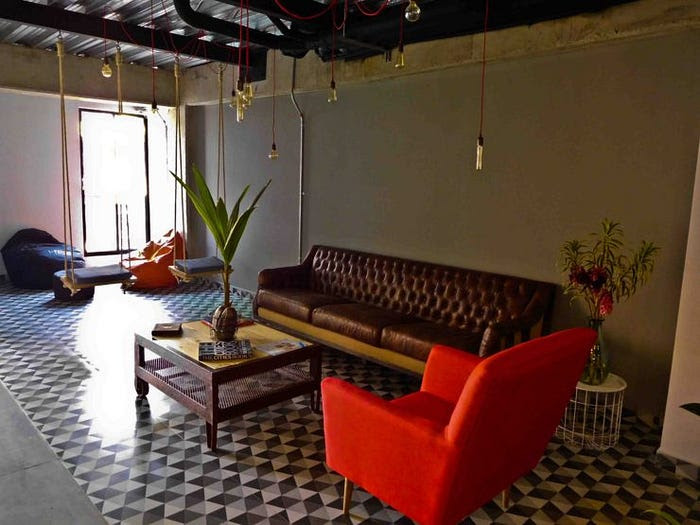 They’ve created every traveller´s dream hostel and addressed the needs of even the pickiest flashpacker — a hostel / boutique hotel hybrid built to the highest specifications. There are swings in the lobby, a shop selling local products to support local artisans, musical instruments and board game in the multi-levelled chill out room, a study zone to hone your Spanish, rooftop hammocks with panoramic city views, a living wall that runs from the 1st floor to the roof and super comfy dorms that outshine most boutique hotels I’ve stayed at. 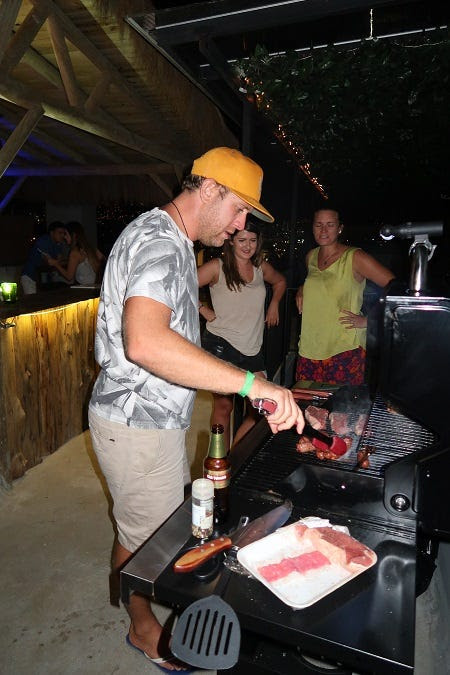 But it´s not style over substance, the staff are efficient at helping you book tours and transportation, the location is safe and convenient and there is already a real traveller buzz to this place making it easy to meet other backpackers. And thankfully, it’s got a sociable bar but isn’t a ‘party hostel’ so you can bank on a good night’s sleep. 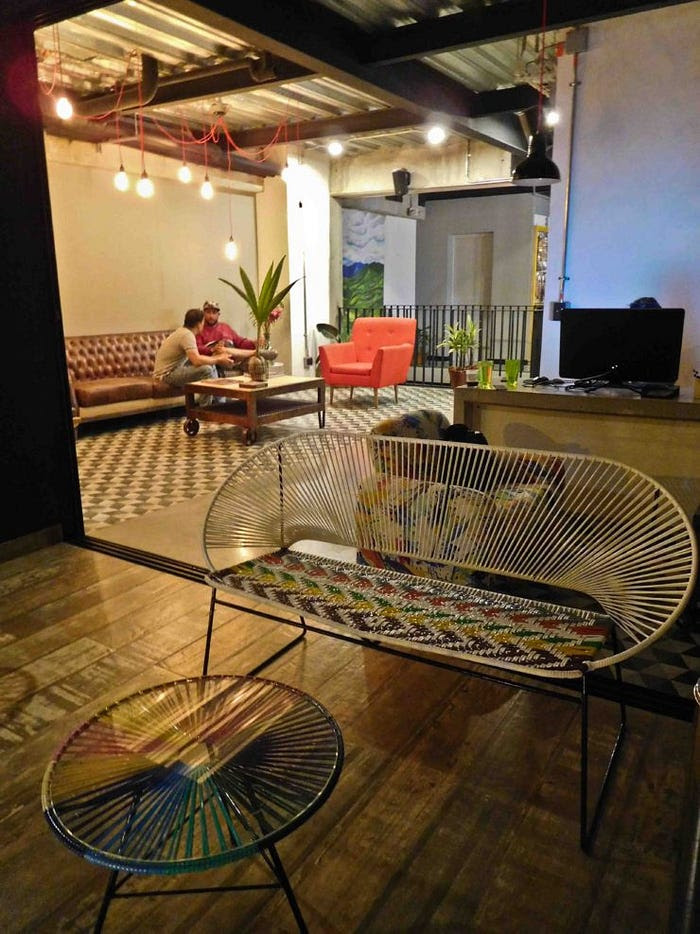 Volunteer In The Barrio

Volunteering is one of the most memorable and rewarding things you can invest your time in when you travel. And Colombia has plenty of opportunities to make a difference. Many of the city’s barrios were once no go zones but Medellin has seen a huge transformation since the 90s. Whilst you can go on touristy barrio tours to get a sense of what people have been through, I’d urge you to find the time to volunteer at Angels of Medellin, a charitable foundation helping families displaced by the drugs war. 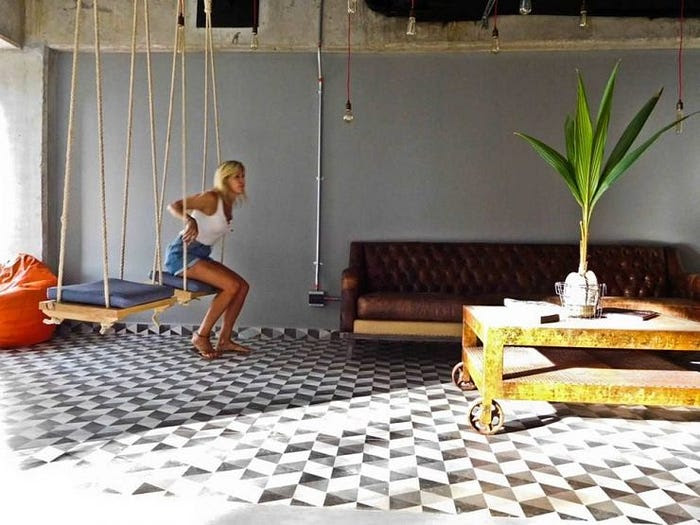 It´s truly shocking to see the disparity between rich and poor in Colombia but a stark reminder that whilst it´s all well and good eating at fancy restaurants and putting money into the economy, it´s equally important to do something philanthropic while you´re away and see how many Colombians live.

Spending even a day volunteering with founder Marcos will teach you more about the city’s bloody past and the scars it still carries than any guide book or tour. By volunteering, you´ll come away feeling that you have made a mark in some small way — helping improve a child´s English perhaps or serving a meal to a grateful pensioner who probably won´t eat again that day. 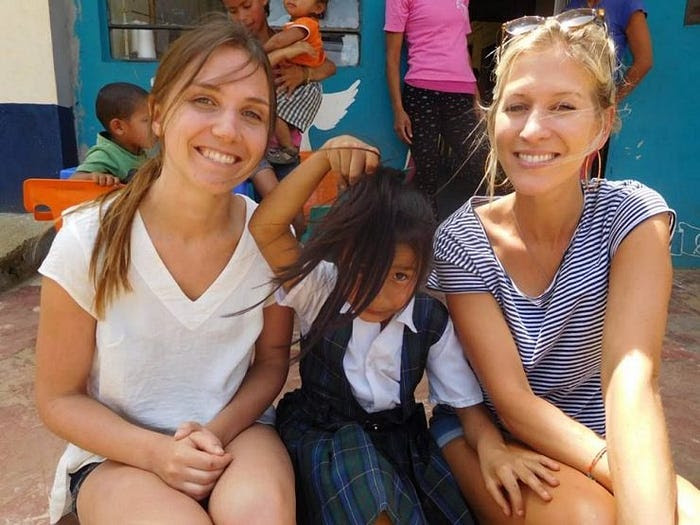 So bottom line is that I implore you to drop Marcos an email and go along to see what he´s created for the residents of this neglected neighbourhood. Teaching English to kids and cooking for the elderly was one of the most rewarding and memorable things we did in Colombia and I´m sure you´ll feel the same. Contact Marcos through his Facebook page here.

Whilst Medellín can be expensive, there are plenty of free activities if you know where to look. The Museum of Modern Art for example or the city’s Botanical garden, which makes a peaceful retreat for an hour or two. If you arrive before 4pm you can walk around the butterfly house as dozens of species of mariposa flutter around your head. The Jardin Del Recuerdo cementary where Pablo Escobar was laid to rest is also free to visit if you have an interest in that sort of thing. His grave is immediately to the right if you are facing the visitors centre. Follow the gringos… 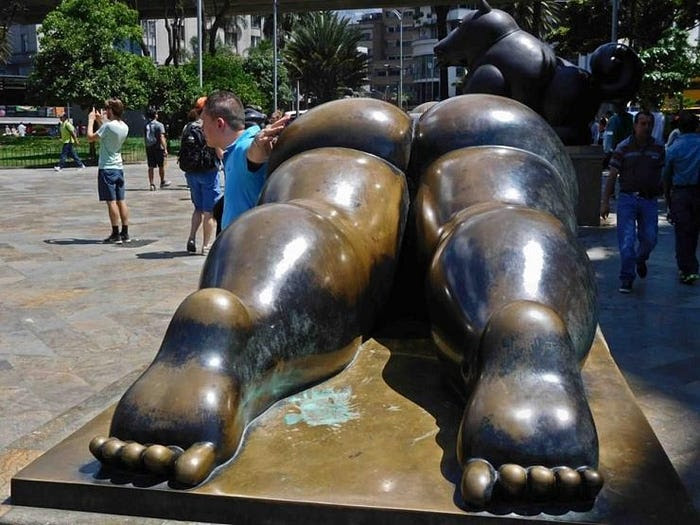 The best way to get your bearings and learn about Medellin’s history it to sign up for the free walking tour. Over 4 hours you’ll pound the hectic streets of downtown Medellín, stopping to observe the prostitutes who sell their bodies outside the church, gawping at the photogenic Plaza Botero dotted with 23 comically chubby sculptures by the famous Colombian artist and visit San Antonio Park, the site of Pablo Escobar’s heartless bombing which killed 30 people. It may bill itself as ´free´ but in fact the hugely knowledgeable guides don´t get paid so rely purely on tips to make a living — 20–25,000 pesos per person is a fair contribution.

See The City From Above

Whether you choose to take the cable car up to a viewpoint or go paragliding over the city, make sure you see Medellin from above. Not many cities afford such incredible views and there are endless ways to see them. Our hostel, Los Patios Boutique, offers jaw dropping views at sunset or during the day, I’d recommend getting one of the cable cars for views over the sprawling barrios below. 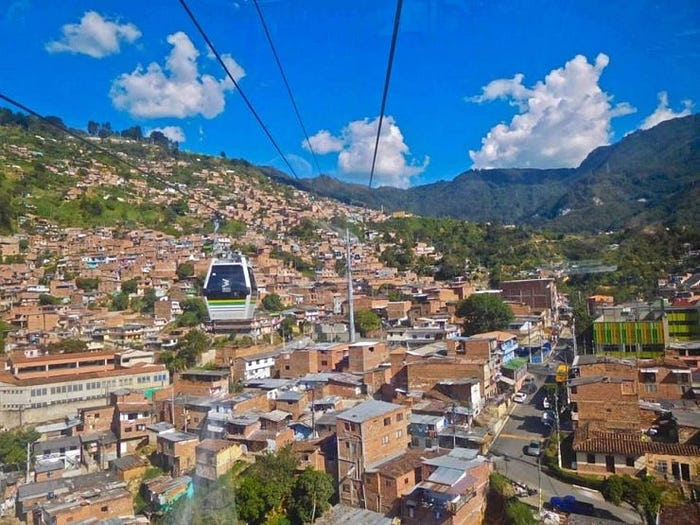 Most backpackers stay in or around El Poblado to be close to the best nightlife. Weekends come alive in Medellin but it’s best to go out in a group with people from your hostel. Happy Buddah is a popular meet up point for gringos who then flood the surrounding bars and clubs. On Wednesdays there´s also a language exchange night which offers free beer for the first 50 people. 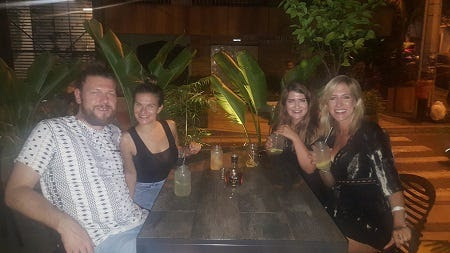 For something less backpacker-y, get dressed up and try and blag your way into the most exclusive bar… the rooftop of Charlee’s hotel. It has spectacular views across the city and you can sip over priced drinks around a glamorous rooftop pool — you could be in Ibiza or Miami. Well heeled Colombians will put you to shame in your flip flops so come smart and boys, you won´t be allowed in without girls in your group. Whilst the area seems safe it’s also dangerous and 12 tourists were killed in the last month there so be aware — avoid the drugs scene, sex tourism and walking alone and you should be fine.

Be Inspired by Colourful Street Art

Take in Medellin’s impressive graffiti as part of a tour or just hop on the new T-A metro line which runs 4.3 km east from the San Antonio metro station to the Buenos Aires neighbourhood which is a safe place to wander around in the day and take in the street murals that feature on almost every corner. 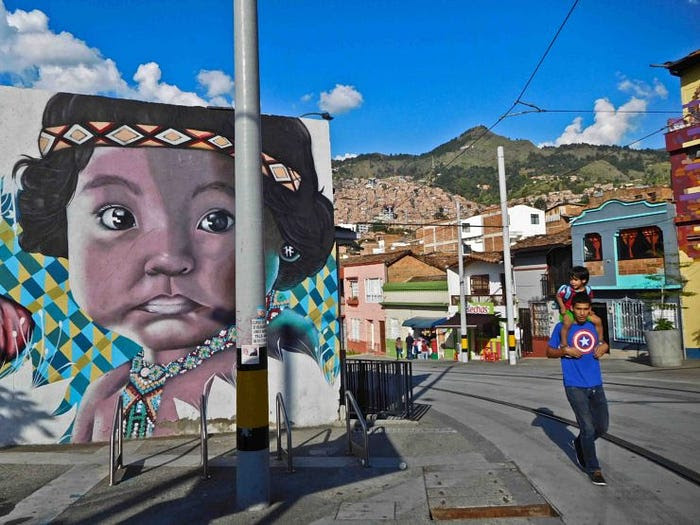 Artists come from all over the world to make their mark here and whilst Bogota also runs a brilliant graffiti tour, this one is well worth checking out.

Public transport is world class in Medellin and the impressive network of trams and metros are masterclass in how urban planning can transform a city. It’s really easy and cheap to navigate the city so don’t rely on taxis alone. The cable cars are another great addition, not just for tourists but for allowing more social mobility for the poorer areas who can now reach the city more easily to work.

Topping my Travel Guide to Medellin is sampling the famous Bandeja Paisa, a typical dish of Colombia which will fill you up for the rest of the day. It consists of meat of your choice and is accompanied by a heaping mound of sweet plantain, salad, avocado, a fried egg, rice and beans. The best spot to try one is Centro Comercial Palacio Nacional.

You will visit this on the free city walking tour so make a note of where it is — its a palatial building from 1925 which has been transformed into a garish shopping mall with more than 200 budget shops (most selling fake designer clothing and footwear often manufactured on site). There is a casual restaurant right in the middle which serves delicious Bandeja Paisa with a big dose of Colombian charm. At lunchtime expect to queue with locals who flock here for a bargain meal.

If you fancy a blow out dinner (well, most mains average at $15 so not too bad), try Oci.Mde. The cocktail bar alone is worth a visit and if you can´t be bothered to wait for a table, you can eat at the bar counter. Dishes include crispy belly pork salad, slow cooked beef and chorizo and fish stew. As they say in Colombia, ¡buen provecho! Everything we ate was outstanding but it´s quite dressy so maybe don´t go dressed in flip flops and shorts.

For a sugary pick-me-up head to Amarillo chocolate Cafe, a quaint little panaderia offering an enticing selection of cocoa themed drinks and snacks. The chocolate frio is incredible and they also do a good selection of breakfasts.

This articles has been written by Caroline of Backpacking in Hells